Perhaps Panini America's best brand and the world's best top-flight soccer league come together once again in 2020-21 Prizm Premier League Soccer. With all of the best players from all of the 2020-21 Premier League clubs showcased on Panini's brilliant opti-chrome technology, these cards are not to be missed for the 2020-21 season!

A 300-card Base Set forms the foundation of the collection, featuring all 20 Premier League clubs and all of their stars. Then there are six different Base Set Prizm parallels to find in Hobby Choice packs!

Prizm Premier League offers a variety of inserts to collect! Color Blast, Fireworks, and Emergent lead the group of inserts that highlight highly collectible footballers, while the Stadiums and Team Logos inserts commemorate each club's most iconic symbols!

Hobby Choice packs of 2020-21 Prizm Premier League will contain plenty of autograph cards to chase. Hunt for authentic signature cards of some of the greatest stars of the Premier League today, as well as of many Premier League heroes of the past! There are even some special Dual Signatures cards that will be especially difficult to find!

Prizm Premier League will once again be the home of Panini's soccer Kaboom! cards for 2020-21. These colorful illustrations of only the very best players are one-of-a kind collectibles!

BASE:The Prizm Premier League Base Set spans 300 cards! With 15 cards per club, all the stars are included, and there are five Choice-exclusive parallels to chase!

BASE SET PRIZMS CHOICE RED: The Prizm Premier League Base Set spans 300 cards! With 15 cards per club, all the stars are included, and there are five Choice-exclusive parallels to chase!

BASE SET PRIZMS CHOICE TIGER STRIPE: The Prizm Premier League Base Set spans 300 cards! With 15 cards per club, all the stars are included, and there are five Choice-exclusive parallels to chase!

COLOR BLAST: Color Blast cards have quickly become some of the most sought-after inserts, regardless of sport, and these eye-catching cards showcasing some of the Premier League's elite players will only extend that reputation. They're hard to find, though, and their greatness is literally unparalleled!

TEAM LOGOS: Team badges - players wear them, goal-scorers kiss them, and collectors can collect them in the Team Logos insert! All 20 2020-21 Premier League clubs are represented.

DUAL SIGNATURES PRIZMS CHOICE GOLD: The Dual Signatures Prizms Choice insert bolsters the variety of autograph cards available in Hobby Choice packs of Prizm Premier League. Each of these 10 special dual-auto cards showcases a pair of players from a particular club, and the set includes stars of both the past and present. 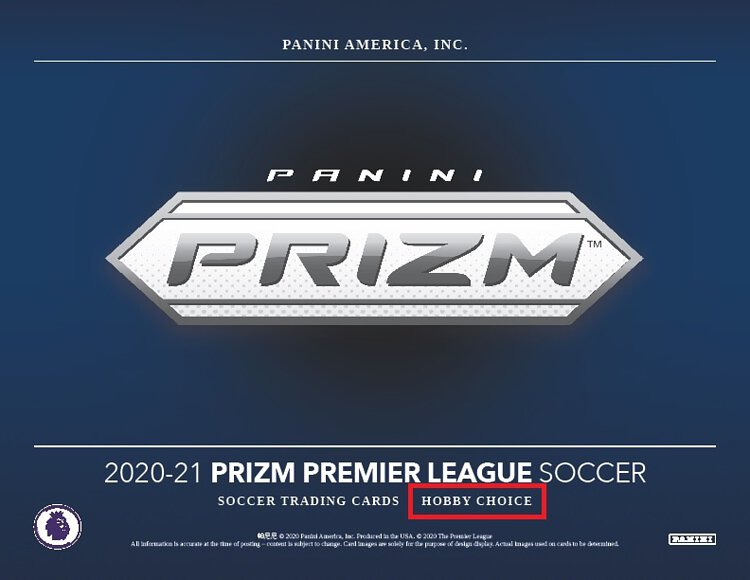 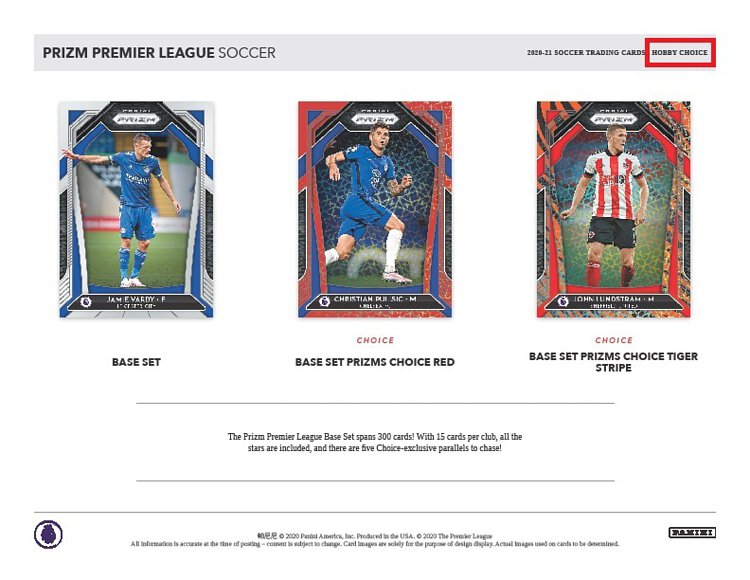 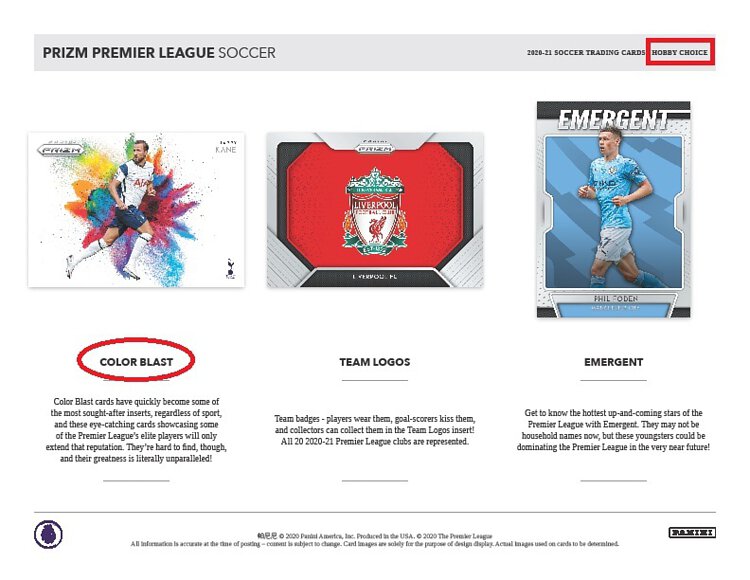 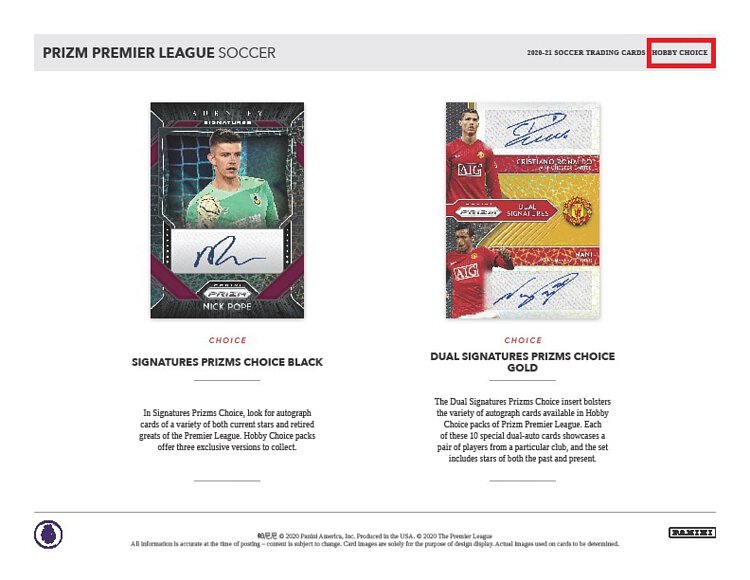 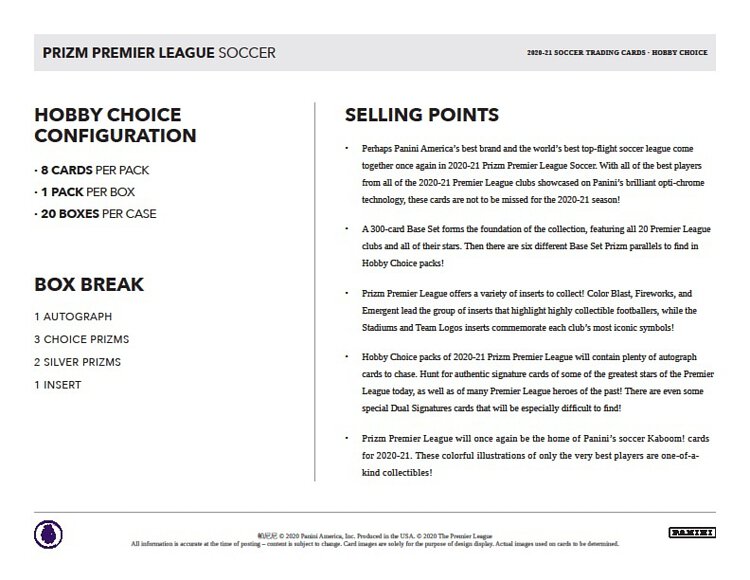 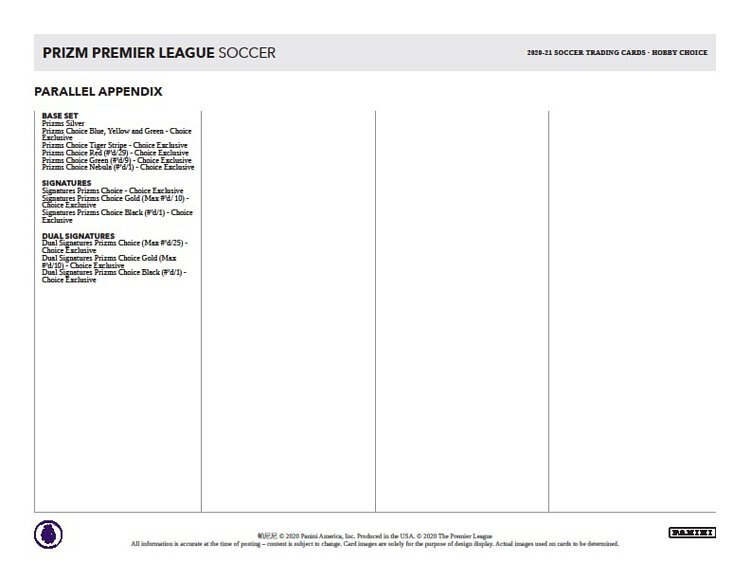