Most boxes will deliver EXTRA Autograph and Memorabilia Cards!

One of the most-anticipated releases of the year, National Treasures Football is loaded with on-card autographs, oversized patches, and all the best current and retired players the NFL has to offer.

Look for all the top rookies with the always-popular Rookie Patch Autographs, which feature on-card autographs and oversized patches, all #'d /99 or less!

Chase multi-signed Treasure Chest Signature booklet cards, which include 12 autographs and are limited to five or less! Also part of the larger main set are the Rookie Patch Autographs. As far as hallmarks go, nothing changes. Signatures are on-card, premium swatches are oversized and base versions have 99 copies. Historically, as far as modern products go, these rank as a player’s top Rookie Card. Among the parallels are Green Jersey Number, Holo Silver (/25 or less), Midnight (/20 or less), Holo Gold (/10 or less), Black (/5 or less), Printing Plates (1/1), Red (1/1), Red Brand Logo (1/1), Red Laundry Tag (1/1), and Platinum NFL Shield (1/1). Autographs, Memorabilia Cards and Other InsertsCrossover Rookie Patch Autographs (/99 or less) use designs from different sports and years and apply them to the 2021 draft class. Holo Gold (/25 or less), Brand Logo (/2 or less), Laundry Tag (1/1) and NFL Shield (1/1) versions are also on the checklist. There are also Crossover Rookie Patch Autographs Dual booklets that double up the players, signatures and swatches. Standard versions have no more than 10 copies each with one-of-one Platinum parallels also available.

Rookie First Edition Signature Booklets (/99 or less) make their debut. These open up to showcase both an autograph and a massive memorabilia piece. 2021 Panini National Treasures Football has additional rookie ink among its other inserts. Rookie Signatures Field Pass (/99 or less) use action photography. These have a handful of parallels including Gold (/25 or less), Holo Silver (/10 or less), Black (/5 or less), Platinum (1/1) and Printing Plates (1/1). The Future (/25) returns with a new batch of first-year signatures done on acetate stock. Colossal Signatures (/49 or less) are back. Veterans and retired greats are part of the checklist here. One of the most recognized inserts in the National Treasures line, these have large swatches. Holo Silver (/25 or less), Prime Logo (/2 or less), Printing Plates (1/1), Prime Laundry Tag (1/1) and Prime NFL Shield (1/1) versions exist as well. 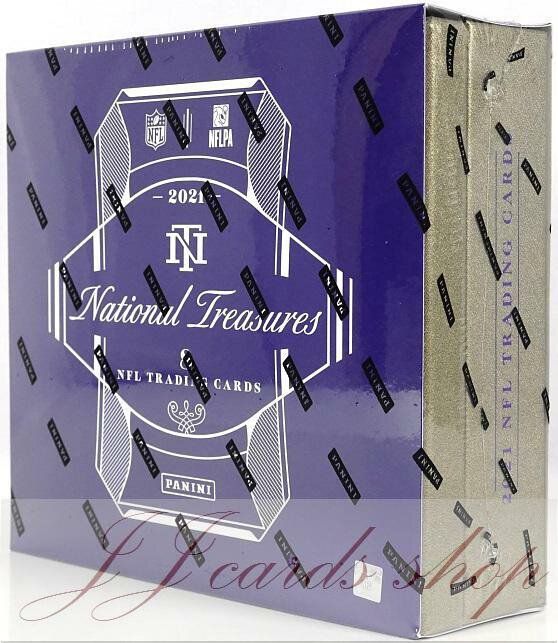 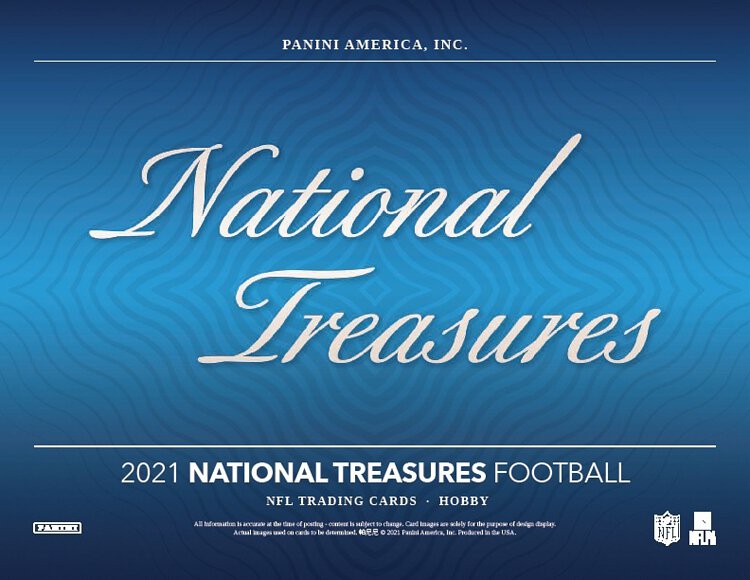 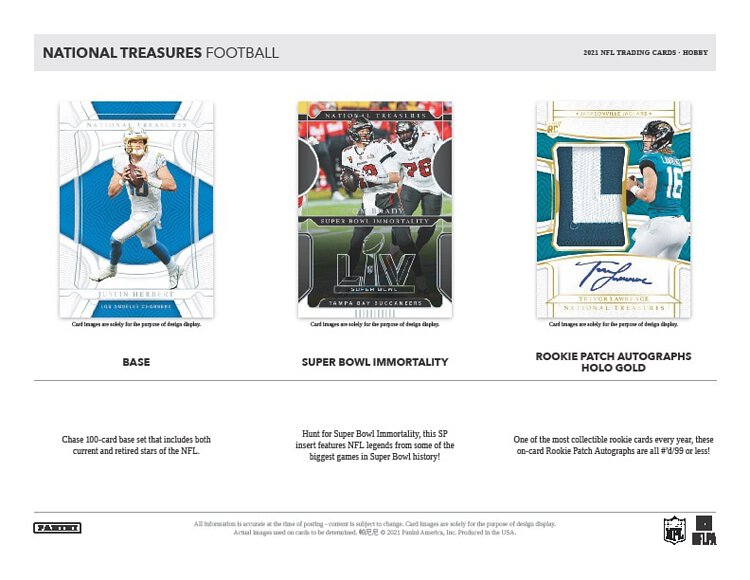 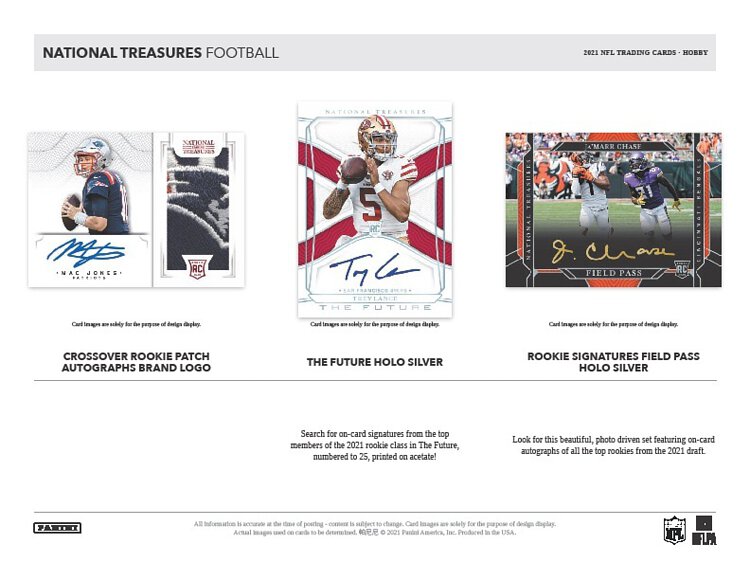 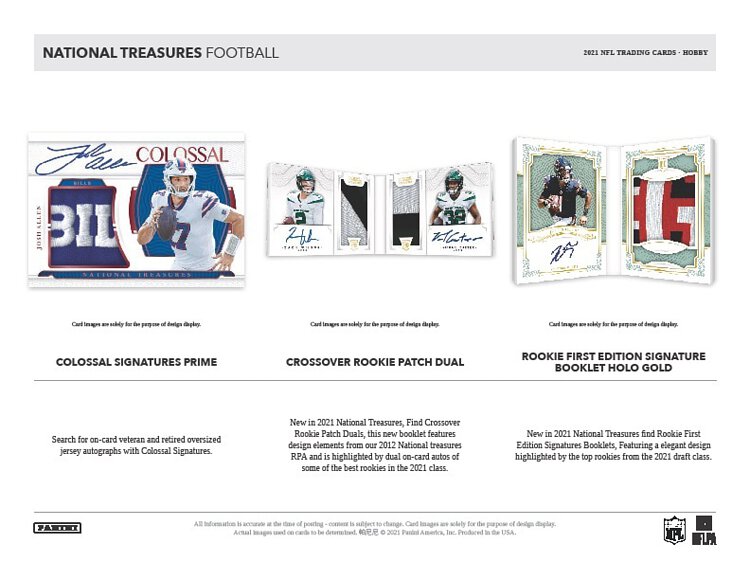 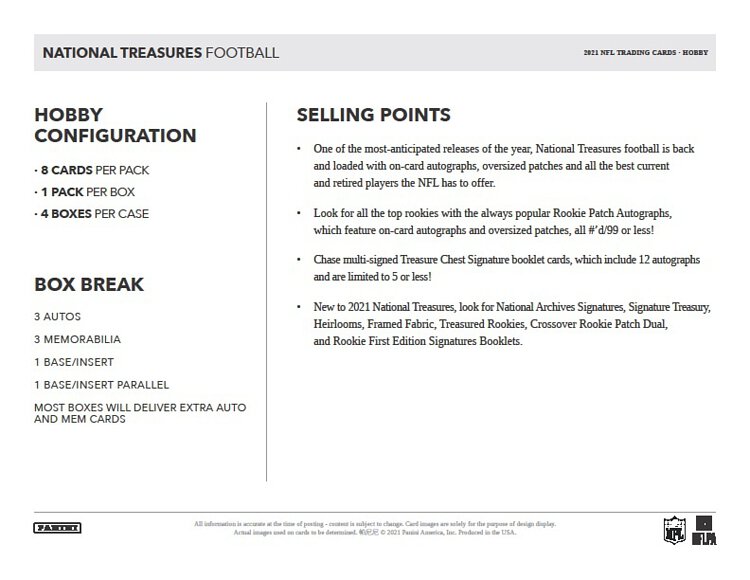 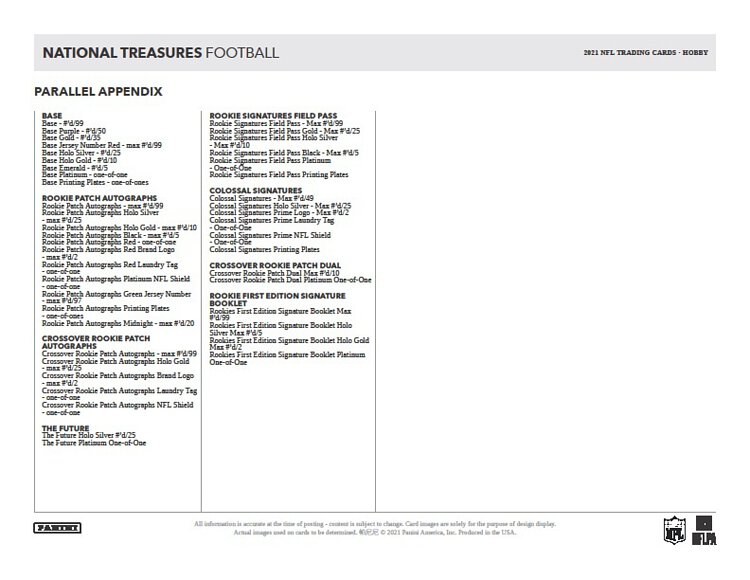