Each Box contains One Autograph, One Insert, Two Parallels, Eight Rated Rookies, and Eight Base Cards!

One of the most anticipated releases of the of the year, 2021 Clearly Donruss is loaded with all acetate autographs, parallels and inserts from the best of this year's stellar rookie class!

Search for fan-favorite inserts and their autograph parallels in Clearly My House!, Clearly The Rookies, Clearly Out of this World and Clearly Dominant!

Chase Rated Rookie tribute cards that feature acetate re-creations from some of the most iconic rookies in the NFL's recent history from stars such as Peyton Manning, Kyler Murray, Aaron Rodgers and many more!

BASE: Collect a 50-card all-acetate base set, which features the brightest stars from today's NFL landscape!

RATED ROOKIE: Chase a 50-card Rated Rookie checklist, which is loaded with the top talent from this year's stacked draft class!

CLEARLY RATED ROOKIE AUTOGRAPHS: Look for one of the most iconic rookie cards of all time with a bold autograph in Clearly Rated Rookie Autographs!

CLEARLY THE ROOKIES: An acetate spin on a fan favorite rookie card, look for Clearly The Rookies, as well as its autograph parallel!

CLEARLY OUT OF THIS WORLD: Be on the lookout for Clearly Out of this World inserts and its many parallels, which includes a far out autograph parallel!

CLEARLY RATED ROOKIES 2017: Paying homage to some of the most iconic rookie cards in the NFL's recent history, be on the lookout for autographs from some of the NFL's biggest stars such as Patrick Mahomes II, Dak Prescott, Josh Allen and many more in an all-new, acetate version of their Rated Rookie card!

GRIDIRON MARVELS: The NFL's biggest heroes are back and better than ever in acetate form, landing at one in every third case, on average!

NIGHT MOVES: Catch some of the NFL biggest names in another fan favorite, this time printed on acetate, in Night Moves! Odds are one in every third case, on average!

DOWNTOWN: One of the hobby's favorite SP inserts debuts in Clearly Donruss, which features creative city driven artwork behind some of the NFL's top stars!

After a couple of releases in basketball and a spot in 2020 Panini Chronicles, 2021 Clearly Donruss Football marks the brand’s standalone debut in the sport. An extension of the main Donruss line, here cards are given an acetate twist. In turn, it’s more premium but not to the point where it’s an extremely high-end release.Hobby boxes include one autograph and one insert.2021 Clearly Donruss Football Checklist OverviewThe full base set consists of just 100 total cards — 50 veterans and 50 Rated Rookies. When it comes to distribution, both are equal at eight per box or an average of two per pack. Although the design is the same one used for the main 2021 Donruss set, collectors can look for updated rookie photos. Clearly Rated Rookie Autographs are one of the cornerstones when it comes to the product’s signatures. Besides the base versions, there are Mosaic Holo, Rated Rookie Logo Holo, Blue (/99 or less), Red (/49 or less), Green (/25 or less), Silver Holo (/10 or less), Gold Holo (/5 or less) and Platinum Holo (1/1) parallels. Recent Rated Rookies from the likes of Patrick Mahomes, Josh Allen and Dak Prescott are recreated here with both acetate and autographs. My House! and Clearly Dominant can also be found on the checklist.2021 Clearly Donruss Football cards at a glance:Cards per pack: 5Packs per box: 4Boxes per case: 16Set size: 100 cardsRelease date (subject to change): March 23, 2022What to expect in a hobby box: 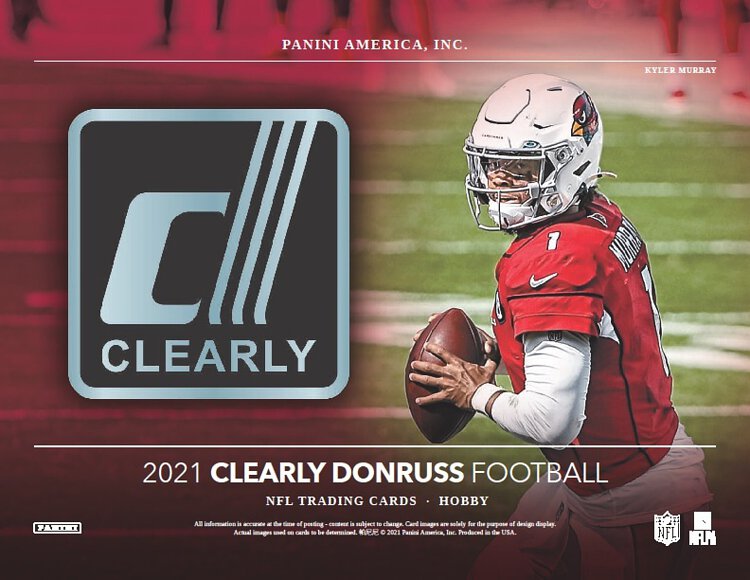 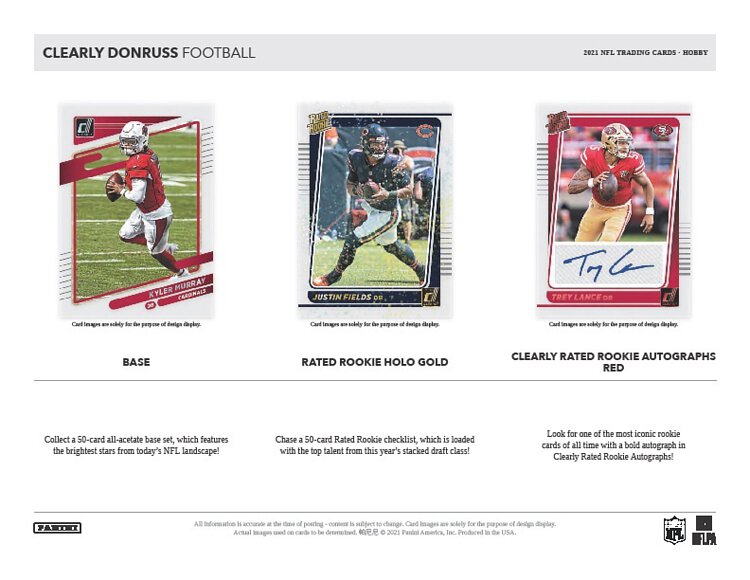 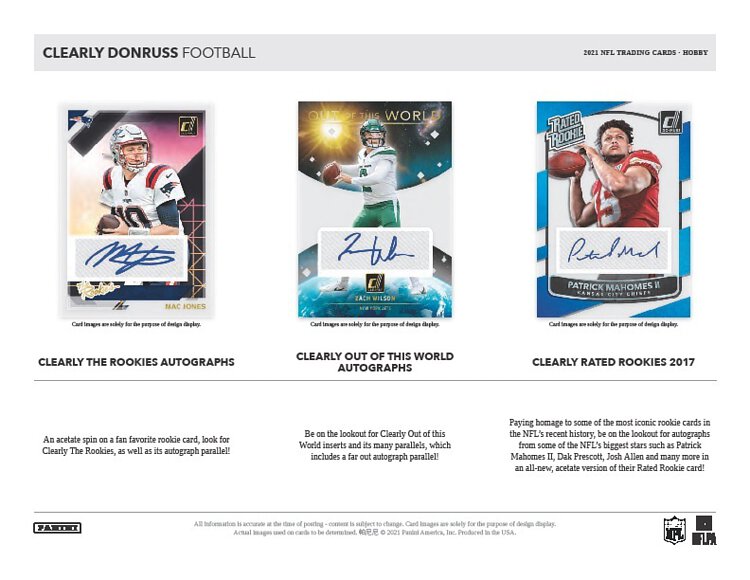 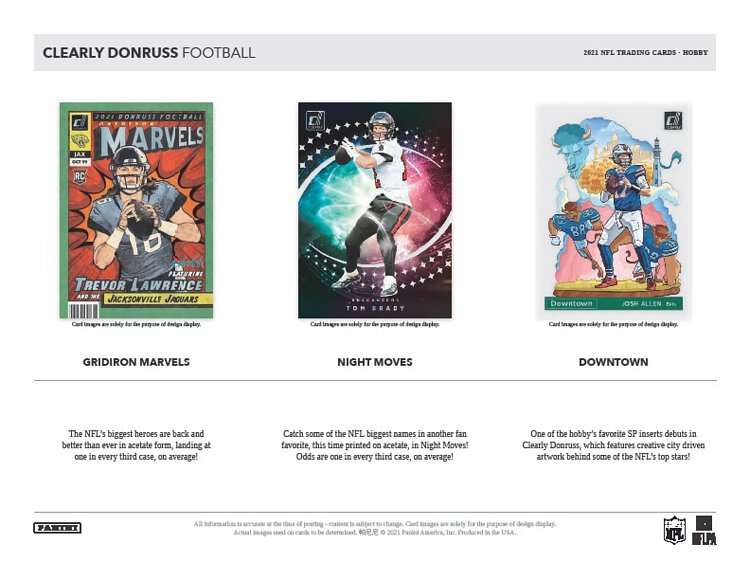 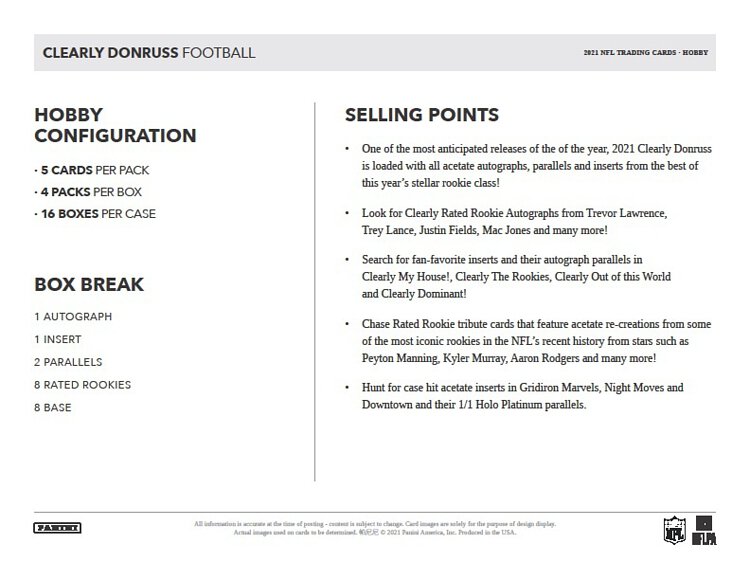 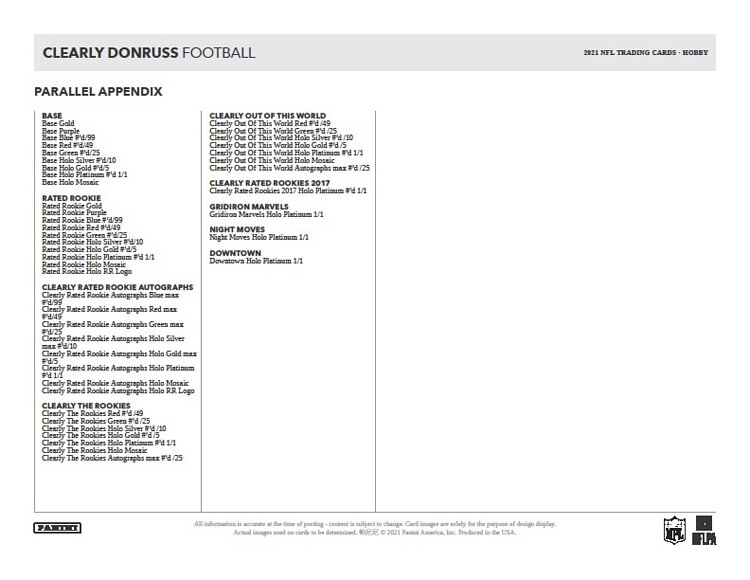