Look for Opening Day 1/1 Parallels and Base Card Image Variations!

Since 2000, Topps Opening Day has been the quintessential entry-level Baseball card collecting product.

Filled with dynamic in-game photography of fan-favorite players and mascots, inserts that celebrate "America's Pastime", rare base card parallels, and autographs and relic cards, 2022 Topps Opening Day has something for every collector.

200 of the game's most popular superstars, rising young players, and new rookies are highlighted here. Includes cards of players that will be featured in Topps Baseball Series 2!

1 of the following per pack!

Opening Day: Celebrating the start of the season, these cards capture the pageantry of the 1st game played during the 2021 MLB season.

NEW! Triple Play Cards: A unique triple subject card that highlights some of the best players in the game.

NEW! Bomb Squad: Featuring the best home run hitters in the game, past and present.

Dugout Peeks: Get a glimpse at some of your favorite players as they watch the game, interact with teammates, or just relax within the confines of the team dugout.

Walk this Way!: The best walk-off hits from the 2021 MLB season are featured with imagery to match.

Base Card Image Variations: Over 25 players will receive an image variation base card featuring a completely different image from the 2021 MLB season.

Opening Day Autographs: Up to 20 MLB rookies and stars are celebrated on cards that also have their signature.

Ballpark Profile Autographs: Some of the best ballpark personalities are featured with an on-card autograph.

Opening Day Relics: Collectors will "Own the Game" with these cards that contain pieces of game-used memorabilia.

Mascot Relics: Our favorite mascots around the league are featured with pieces of mascot-worn memorabilia.

Diamond Relics: Cards will feature a player and dirt from the Baseball diamond from his home stadium.

Turf War Dual Diamond Relics: Two players featured with an image on the front and back of card along with dirt from the front players home stadium.

Mascot Patch Relic Cards: Manufactured patch relics highlighting some of the top mascots in the game.

Mascot Autograph Relics: The ultimate mascot card featuring an autograph and relic from the best mascots in MLB.

Autograph Diamond Relics: Cards will feature a player and dirt from the Baseball diamond from his home stadium, along with an autograph.

The days of getting packs of cards for $0.35 per pack are gone. That said, not everything out there is expensive. 2022 Topps Opening Day Baseball cards keep packs on the cheap and accessible side.That might mean not a lot of content that’s premium in the modern sense, but that’s not what Opening Day is about. Rather, the focus is on fun and the game of baseball.2022 Topps Opening Day Baseball Checklist OverviewThe base set, which has 200 cards, isn’t an original take. Sticking with the brand’s history, it takes the year’s flagship layout and gives it the smallest of tweaks — the addition of an Opening Day logo on the front. According to Topps, more than 25 players also have Image Variations that swap out the photos. Select SSPs also have autographs (/10).Inserts2022 Opening Day Baseball has a lot of inserts. While odds vary, they combine to land one per pack.Taken as a whole, themes explore different aspects of what it’s like to take in a game at a major league ballpark shown through the lens of younger fans.That means the return of Mascots and Opening Day, a set that uses shots from the earliest days of the 2021 season.These aren’t the only returning inserts. Dugout Peeks shows casual shots from the bench area. Walk This Way highlights walk-off home runs.New for 2022 are Luck of the Irish, which shows players from St. Patrick’s Day games, and Bomb Squad, a survey of great power hitters past and present. Autographs and Memorabilia CardsFor those not overly familiar with Opening Day, it’s worth noting that the product has never promised autographs or memorabilia on a per box level. They exist, but they’re not a central focus.On the signature side, Opening Day Autographs is a mix of vets and rookies. Ballpark Profiles Autographs are different in that they center on personalities rather than active players, like broadcasters. Turf War Diamond Relics take a similar dirt approach. However, these are double-sided cards and include two players.Major League Mementos have pieces of memorabilia taken from different parts of a ballpark.2022 Topps Opening Day Baseball cards at a glance:Cards per pack: Hobby – 7Packs per box: Hobby – 36Boxes per case: Hobby – 20Set size: 200 cardsRelease date (subject to change): March 9, 2022What to expect in a hobby box: 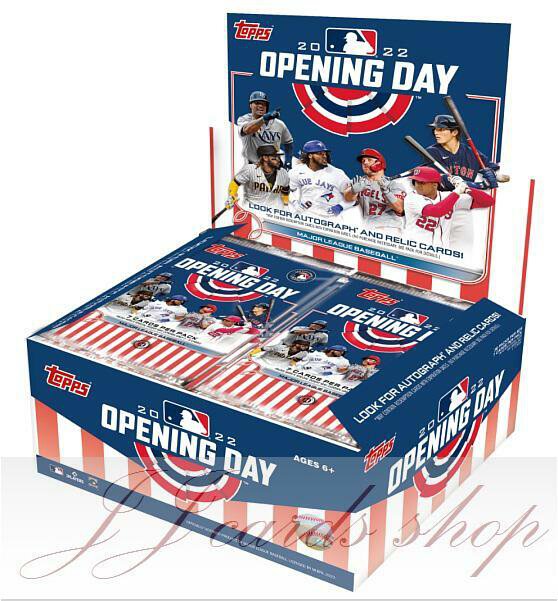 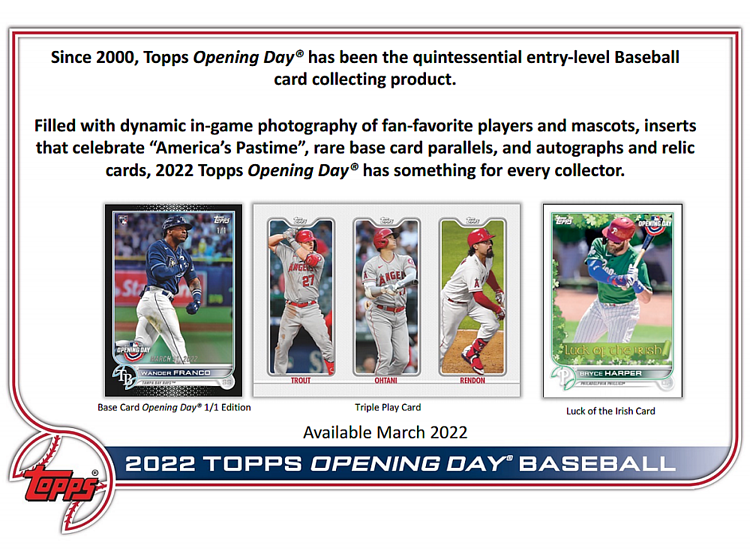 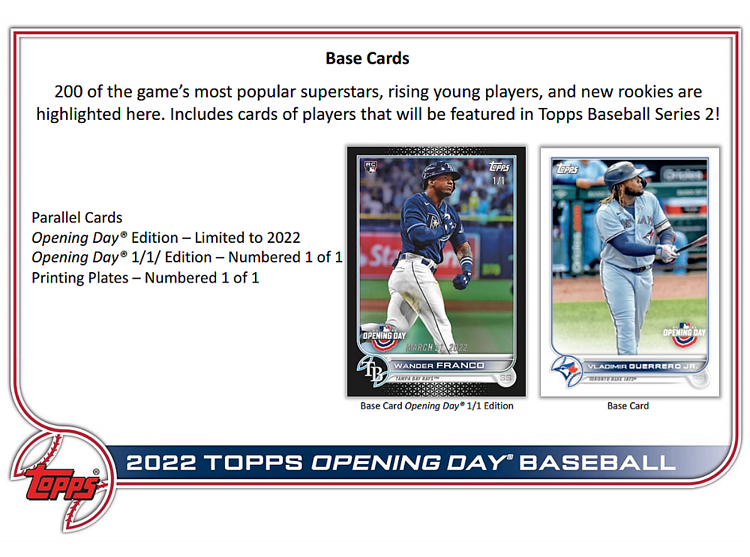 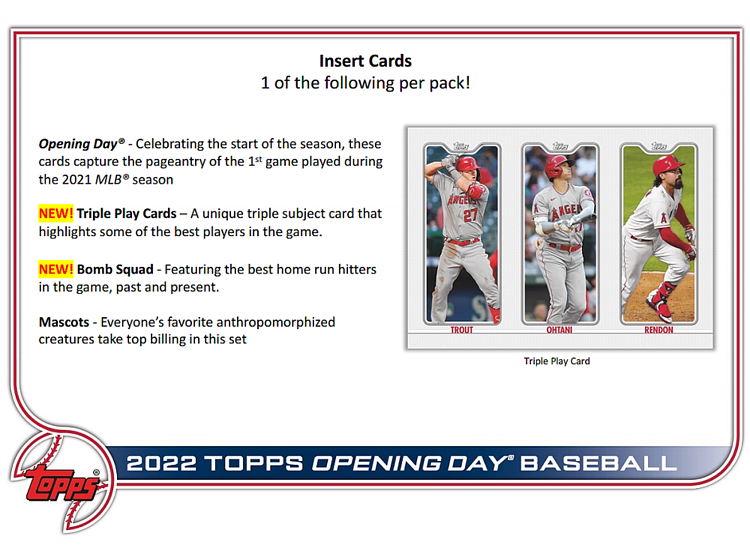 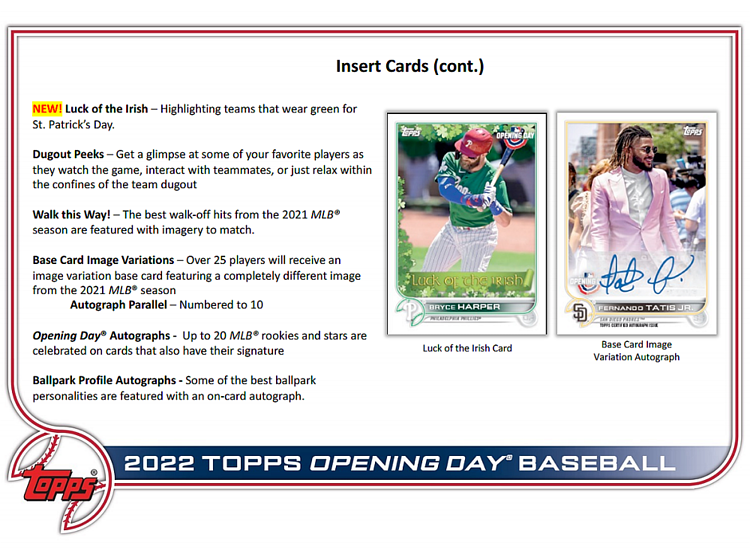 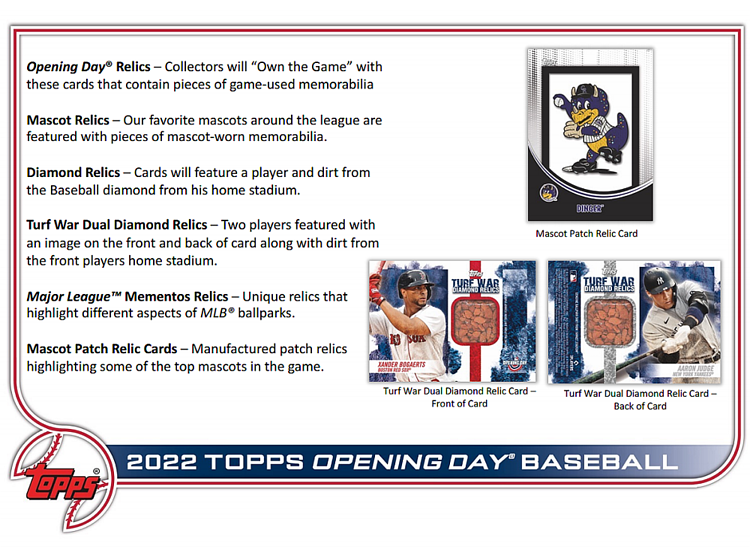 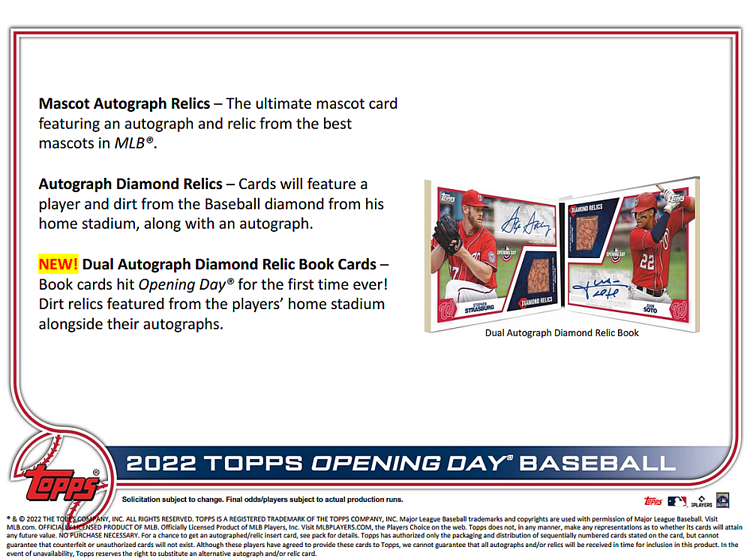